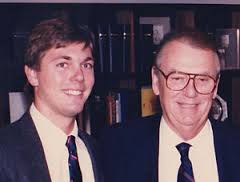 Marty Sumichrast received his Bachelor of Science degree from the University of Maryland.  Marty along with his late father Dr. Michael Sumichrast, an accomplished author and American real estate economist for the National Association of Home Builders from 1962 to 1987, co-authored two books on; Opportunities in Financial Careers and The New Complete Book of Home Buying, which were both published by Dow Jones Irving Books. Marty Sumichrast has also been a recognized contributor to popular financial market sites such as TheStreet, SeekingAlpha has been quoted by many national forums such as CNN.com.

Marty Sumichrast began his three-decade entrepreneurial career assisting his late father rebuild homes, then acquiring rental properties in Washington DC, to helping pioneer award winning residential and commercial real estate developments in Eastern Europe during the fall of communism; to forming his own investment fund to invest in real estate developments across the Eastern European nations, eager to Westernize during in the early nineties. Marty Sumichrast then went on to expanding those investments to form a large global brokerage firm with offices in the United States and Europe, investing in companies across all industry sectors in emerging markets worldwide.